Low clouds play an important role in Earth’s energy budget, but they are poorly represented in global climate models (GCMs). The resolution of GCMs, which is on the order of 100 km in the horizontal, is too coarse to resolve the boundary layer turbulence and convection controlling the clouds. As a result, GCMs rely on parameterizations to represent these processes, and inadequacies in the parameterizations lead to biases in GCM-simulated clouds. To improve parameterizations by calibration with data, we want to harness data from large-eddy simulations (LES). LES  directly resolve cloud dynamics and provide high-fidelity simulations in limited areas. However, LES used for calibration so far have typically been run at a few (less than 10) specific locations, usually associated with field campaigns. The potential of using LES to systematically inform GCM parameterizations has not yet been fully harnessed. 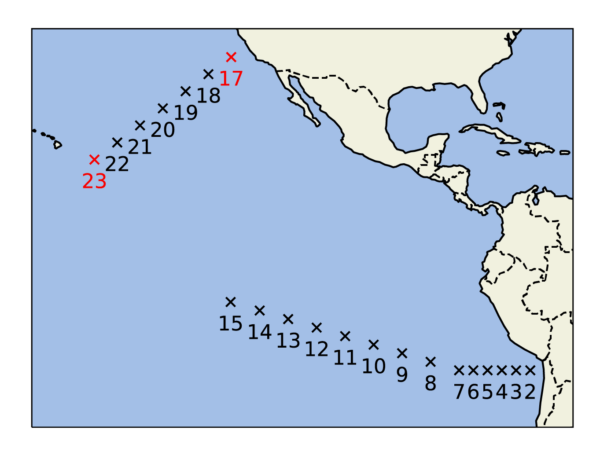 In our recent work, we have expanded the sample of LES available for the calibration and evaluation of parameterizations. We have developed a framework for driving LES by large-scale forcings from GCMs, which can be used at any location on the globe, any time of year, and in any climate state. In our recent paper, we have used this framework to create a library of LES of clouds across the tropics and subtropics, focusing on low clouds over the East Pacific (Figure 1). Figure 2 shows a subset of the LES library. The LES sample the transition from stratocumulus near the coasts (sites 2-3, 17-18) to shallow cumulus over the open ocean (sites 10-15, 20-23), as seen in the decrease in cloud cover and liquid water path. They also sample the seasonal variations in cloud properties at different locations. 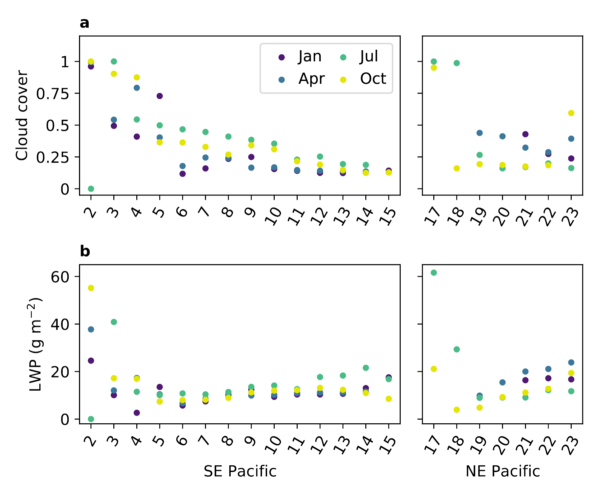 Figure 2. (a) Cloud cover and (b) cloud liquid water path at different locations in the LES driven by HadGEM2-A in different seasons.

Driving LES with GCMs provides an opportunity to generate LES of changed climates and investigate cloud feedbacks under realistic changes in large-scale forcings. Figure 3 shows the LES-simulated changes in the shortwave cloud radiative effect in a warmer climate. In general, the LES exhibit a relatively weak positive cloud feedback (a small decrease in the magnitude of the shortwave cloud radiative effect), which results from a slight decrease in both cloud cover and cloud liquid water path with warming. Near the coasts (sites 2-5, 17-19), the changes in cloud properties are sometimes large, which is usually associated with a change in cloud regimes (e.g., from stratocumulus to cumulus).

Figure 3. Percentage changes in shortwave cloud radiative effect resulting from a 4K increase in sea surface temperature in the LES driven by HadGEM2-A.

The LES library contains about 500 cases and expands the training data available for calibrating convective parameterizations by more than an order of magnitude. The LES results can be compared with single-column models (SCMs) from a GCM driven by the same large-scale forcings.The parameterization schemes  in the SCMs can be calibrated by minimizing mismatches between relevant statistics simulated by LES and single-column models. The LES of changed climates provide a valuable data set for out-of-sample tests for evaluating parameterizations that were calibrated with present-climate LES.

We are using the LES library as a standard test suite for the eddy-diffusivity mass-flux schemes of turbulence and convection in our group. We have built a pipeline for improving parameterization schemes with LES data using different machine learning approaches. Some of the calibration results are shown in this preprint. We are currently integrating the calibrated parameterization scheme into the CliMA Earth System Model.

The LES library is publicly available online. We are currently working on expanding the LES library to include more cloud regimes, such as deep convection.